In November 2018, 2 Marine pilots were grounded after their unusual flight pattern was discovered to be in a very phallic shape. Of course I couldn’t help but realize this was not just a phallic pattern but rather it was an ENORMOUS phallic pattern! Way too large for even the most enthusiastic of size queens if it were a real penis but I was vastly entertained by it. The flight pattern included 2 ball shapes to accompany the giant phallus in Southern California. Good men for not ignoring the balls. Kudos to the aviators for their impressive stick handling… ahem, flight skills! And to be fair, the lake they were flying over looks like a huge dick already. How could the help but be inspired by it?! 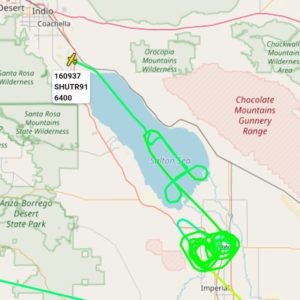 Read more about the story at: https://thehill.com/blogs/blog-briefing-room/news/415625-marine-aviators-grounded-after-flight-pattern-resembled-a